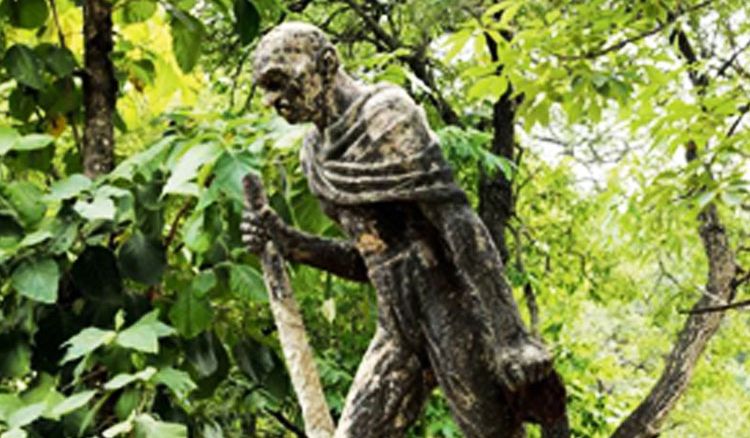 Visva Bharati’s Kala Bhavan has recently come up with a decision of renovating the statue of Mahatma Gandhi situated in its premises, which was constructed in 1968 by artist Ramkinkar Baij. This decision was taken following a request made by President Ram Nath Kovind to the University for renovating the statue during its annual convocation on November 11. According to University officials, this is going to be the first time that the statue will be renovated after it was erected 50 years back. The statue of Mahatma Gandhi is 25 ft. high and made of concrete which has developed several cracks over the years. Principal Sanjoy Mallick along with senior teachers from Kala Bhavan recently conducted a meeting to discuss how the structure would be renovated. Principal Mallick said, “During his visit, the President wished for the proper renovation of the sculpture of Mahatma Gandhi. We discussed the plan for the renovation with senior teachers, including those from the sculpture department”. Kamal Dhar, an assistant professor of sculpture at Kala Bhavan suggested the supervision of Asit Dasgupta, the former head of the sculpture department of the Government Art College in Calcutta and who had worked with Baij during the construction of the Gandhi statue in 1968. Dhar said, “Professor Asit Dasgupta was my teacher. He is 78-years-old right now. I had heard from him many details regarding the construction of the Gandhi statue by Baij. He was in Santiniketan in 1968 as a student of the eminent sculptor. I think it will be great if we get suggestions from him now. All my colleagues appreciated the idea”.