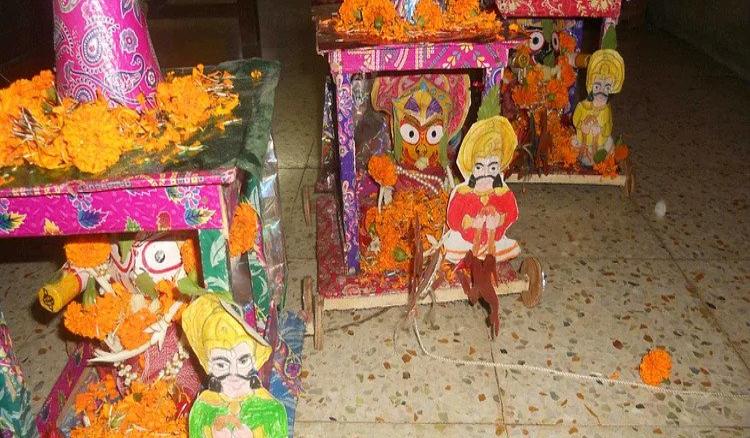 Monsoon has already set in and the season's first festival - rath (or 'roth's as it's pronounced in Bengali) is just around the corner. Devotees are all decked up to pull the chariot of Lord of the universe- Lord Jagannath and his beloved brother and sister There’s  a crazy vibe surrounding this 8 day long festival. Rath yatra has been one of the festival that is rooted in vaishanvism. This festival here may not be as old as Puri’s, but its definitely big. Lets get known about how Kolkatan’s celebrate rathyatra.
The attraction of the Rathyatra in Kolkata is ISKCONS rath yatra and its procession. It is one of the largest Rathyatra as well as the biggest in the city. An ancient Vaishnava festival, rath was popular only in pockets of Bengal, until ISKCON replicated the grand tradition of Puri and started the festival in Kolkata in 1972. Celebrated each year without fail, thousands of people file the streets of Kolkata to throng around the chariot and have a pull at it. Rath has in fact gone on to become an integral part of our childhood as we joined into the festivities with fervour and enthusiam. Last two years due to covid several restrictions were imposed.  A prototype of Puri's chariot and idol, ISKCON's rath leaves the temple premises at Albert Road to wind around the city until it reaches the Brigade Parade Ground, where it stands for the next seven days. A different craze exists among the masses to touch the rope of the rath atleast once to seek the blessing of Lord Jagganath.

The best part of rath is getting your own little chariot, decking it out and placing the clay idols in the seperate compartments. Our mother and grandmother helped us in decorating the chariot with garlands and other stuffs. And then pulling it around the neighbourhood in the evening. Then  we offered bhoga like papad or vegetable fries after the ride. We spent many blissful childhood rath days doing that. And even today, you will see kids doing that in the nooks and little lanes of Kolkata's paaras . Head out to any of the big markets like Jaggu bazar, Manicktala bazar, Sealdah, Gariahat, Kalighat, Lake Market, Lebutala and Rashmoni bazar to pick up your own colourful 'roth' and idols of different sizes. The fun of course lies in helping the little ones decorate it with nifty craft works!
The excitement lies not simply in pulling the little chariots around, but also in visiting the fun melas (fairs) and bingeing on staples like papad ,jalebi and gaja. The biggest fair sets up around the ISKCON chariots in the Brigade Parade Grounds. Like every year, this year too one can catch the Gundicha dance festival in the evening and binge at the food stalls. You must also check out the other melas at Moulali and Amherst Street. Aside this, there are the rath yatra of Mahesh in Serampore that started in the 14th century is said to be the oldest one after Puri's.