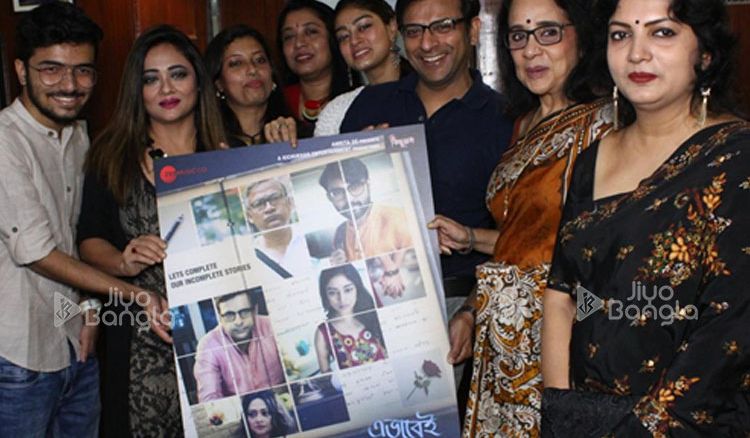 Tale of a troubled marriage

Director Rohan Sen’s first feature film ‘Ebhabeo Golpo Hoy’s first look was launch on 5th November. Not only the director even the cast and crew of the movie were present at the first look launch. The film deals with a director (played by Joy Sengupta), his unhappy marriage and his twisted film.

Apart from Joy Sengupta, Rupanjana Mitra, Saswati Guhathakurta, Bibriti chatterjee were present at the event. Speaking with the young director, he said: “This movie is close to my heart. The concept is unique and refreshing. We all hope this one create the right kind of buzz among the audience.” The filmmaker recently wrapped up the shoot of his dream project. Giving a peek into the film, Rohan said: “The plot of the film will make you think twice for sure. I am lucky that the production team felt the josh behind my story.” On the other hand, while speaking with Rupanjana, she stated: “It’s an interesting role, not much fuzz in it. The audience will love the plot of the film. When Rohan narrated the script it was really good and it had some energy behind the storyline. I had to say yes and I did” The plot already looks quite interesting. The cast of ‘Ebhabeo golpo hoy’ assembles some of the best from the industry. Saswati Guhathakurta said: “I played Joy’s mother. The audience will love the character because it is subtle.” The movie will hit the floor on 14th November.