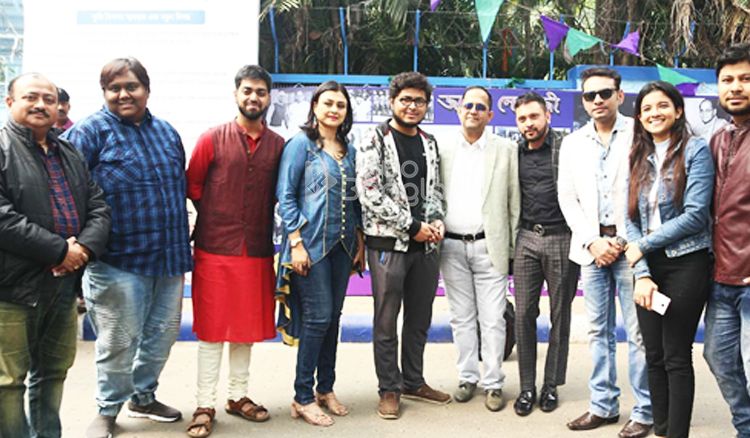 He may only been a few movies old but can easily be recognized as one of the promising directors in recent times. We are talking about none other than Arjunn Dutta. His first feature film ‘Abyakto’ received appreciation from all over film fraternity. On the other hand, 'Roop Production & Entertainment' was overwhelmed by the response of tag line competition (on social media) for their film 'GULDASTA', directed by Arjunn Dutta.

On 124th birth anniversary of Netaji Subhash Chandra Bose, at a city, blood donation camp the producer duo Ankit Das & Suresh Tolani Choose the winner -Shinjan Basu from Howrah for the tag line for 'GULDASTA'.The selected tag line is "GLOP EKI, MIHURTO ONEK."  However, ‘Guldasta’ offer the story of three women namely Srirupa, Dolly and Renu, who are connected in some way. These three characters will be portrayed by- Swastika Mukherjee, Arpita Chatterjee and Debjani Chatterjee.

On the auspicious occasion actress Debjani Chatterjee, Anubhav Kanjilal, Anuradha Mukherjee, Ishaan Majumdar, Abhijit Guha were present form the cast for the event along with Ankit, Suresh & Arjunn. 'Guldasta- Glpo Eki, Muhurto Onek' all set for release this summer. As a matter of fact, Debjani and the young director go long back. Arjunn even considers her a lucky charm. Debjani was cast in his short film ‘The 6th Element’ which was critically acclaimed and later she joined the cast in his last feature film ‘Abyakto’.