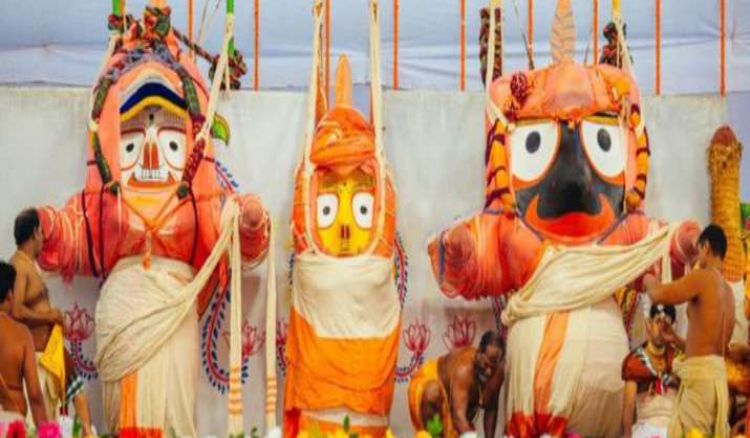 The word 'quarantine' is very common to us in Corona. On the other hand, the government’s quarantine center positive case means quarantining the place and declaring it a red zone. At first, when everyone was terrified, if someone is coming from another state or another country means to undergoing 14 days quarantine. Separate arrangement are made from one roof floor. However, it is not funny to say that this system has been going on since time immemorial. Quarantine is also heard in the Vedic age. So it can be said that quarantine is going well in today's coronal age. In this reunion sacrifice, the gods do not stay away from worldly happiness and sorrow. Man and the god becomes one.

It is said that in the scorching heat of the month of Jaistha, when the souls of all are on the lips, bathing is arranged for the deity to rest his soul. 108 jugs of water are brought from 'Swarnakuyo' and Jagannath, Balarama and Subhadra are bathed. At the end of the bathing ceremony that day, Jagannath and Balabhadra were adorned with elephant-faced headscarves to adorn Ganesha. This form of Jagannath is called 'Gajbesh'. However, due to the extreme bath, Jagannath developed a fever, so he did not stay in public anymore and went to the quarantine. In modern ways it can be called home isolation. The body becomes so ill that various treatments are started immediately. Some priests serve as physicians. Ordinary royal offerings are discontinued.

White cotton garments are made to wear in gem-encrusted garments. Fruits, fruit juices, liquids like milk and light food are consumed, along with some ayurvedic medicines. It can also be called the initial stage of boosting immunity. Flower oil comes from Oriya monastery with which light massage is done to relieve some pain. Blood sandalwood and Attempts are also being made to control the temperature with musk paste. It is called 'Anbasar' because the uninterrupted service continues for 24 hours. There is no scope to worship. The temple remains closed. It is forbidden to see the Lord. This abnormality lasts from Krishna Pratipada after Snanapurnima to the new moon. General standards are maintained in non-leisure services as if it’s a state of mourning. The room is kept fully dark. Only an earthen lamp is lit. Then only white flowers were offered to Jagannath. From the sixth to the ninth, the old coating is removed and polished and a new coating of resin (Jhuna in Oriya) is given. It is called 'Osuya Lagi'.

On the tenth day, he is given soft and sweet water mixed with yellow chlorophyll, behera cloves etc. and given to him to eat. Then gradually a variety of healthy foods are given.

On the eleventh day, the custom of giving red cloth to the idol is observed. Sandalwood, saffron and camphor are also offered.

On the twelfth day, the news reached Maharaja Gajapati, the chief servant of Jagannath, that the Lord and his brothers and sisters had recovered.

Then on the thirteenth day a ritual called 'Ghanlagi' is observed, so that the idol is twisted with a rope.

On the fourteenth day, the work of painting the idol of Jagannath is done. Servants named 'Datta Mohapatra' do this work.

At the end of 14 days, the gods become much fresher. Just as doctors are talks about corona treatment through home isolation from home. However, the responsibility of this whole service rests with the patient and downtrodden community. Even during this corona it has been seen that the conscious educated community maintained social distance while the poor working people have taken little care of it. Would such restrictions have been observed in the case of gods as well? Is that why there is such a rule?

Perhaps it is true that Brahmanism is now capitalism, which at that time took advantage of as much as it could. Although religious people will claim that he is the lord of the world, so at this time he took service in the hands of the oppressed class. This is also his kind of pastime. However, Jagannath Dev recovered from the fever and returned to the sanctum sanctorum exactly 14 days later. In order not to catch the eye of the evil deity, the goddesses fell in love with Jagannath and tied the roots of various vine roots like amulets in the hands of idols. It is seen that the Rath Yatra is organized exactly fourteen days after the bathing procession. In the middle of these 14 days, the health restriction goes in the right way, that's how Jagannath Dev became healthy and strong. The next day means the day of the new moon is 'Nayankal or Netra Utsav'. It is said that on this day the Lord opened his eyes. In fact, on this day the Lord's round eyes are painted.

In Shukla Pratipada, Jagannath got new youth in new colors and new outfits. The leisure period is over.

Then Jagannath again becomes the Nath of the world and sits in the chariot. The chariot is pulled by the ropes of the people and it says its own glory in front.