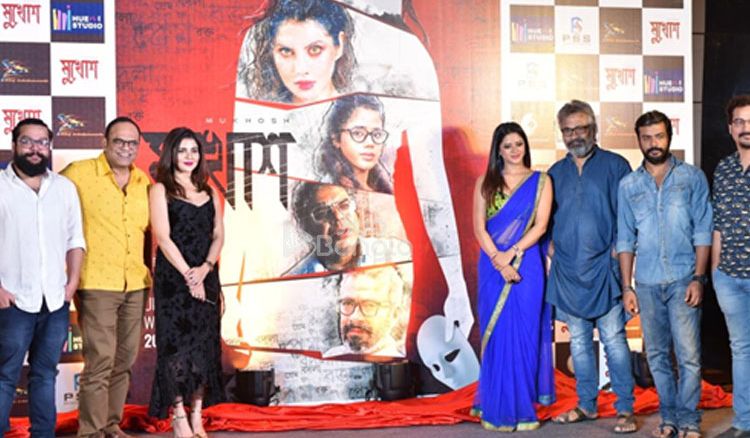 Director Arghadeep Chatterjee’s next ‘Mukhosh’, revolves around the mystery of a missing woman and the story behind it. The thriller stars Shantilal Mukherjee, Rajatava Dutta, Paayal Sarkar, Prantik Banerjee and debutante Amrita Halder in lead. Poster release of the movie was done in front of the cast and crew on 18th November, 2019.

‘Mukhosh’ revolves around a young girl’s complaint about her missing elder sister. Not to mention the trailer created the right kind of buzz in Tolly town. Amrita (the Protagonist of the story) doubts her sister’s husband Rajatava Dutta (Who is a politician), is somehow responsible behind her sister’s disappearance.  The beautiful Paayel Sarkar essays the role of Rajatava’s love interest. When we asked about her character, Paayal said, “This one is a total different character for sure. Previously audience saw me as a cute, sweet character but not this one. She ain’t sweet. I have worked with Rony da and Shalilal da they are brilliant human beings and great actors. It’s really good to work with Arghadeep too.” Shantital Mukherjee will be seen as a tough cop who will be investigating the case. Speaking about the trailer, audience can’t figure much about the plot of the story. Director Arghadeep have successful created the thrill ambience and kept the suspense intact. Madhura Palit, the DOP of this movie created a mysterious ambiance. Most of the scenes have been shot in low light, to create a grim ambience that undoubtedly bring the best of the film.

Speaking with the director, Chatterjee said, “I am happy with the outcome. All I want the audience to sip it in. I hope they embrace the storyline and appreciate it.” The movie is produced by PSS Entertainment. The thriller is scheduled to release on 6th December but the question remains, will Halder find her sister?