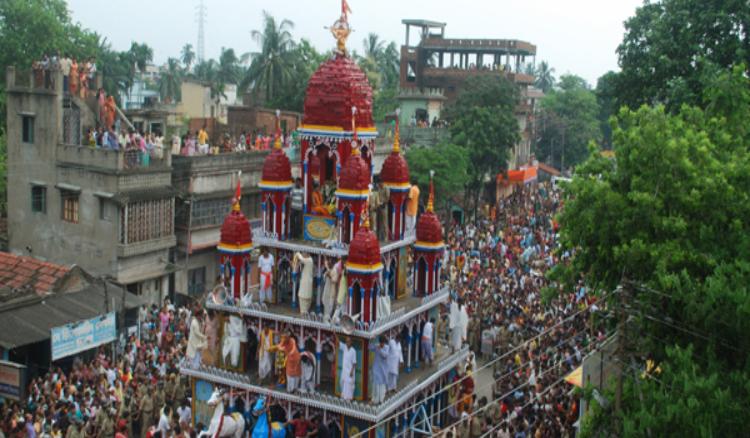 While everyone knows of the famous Rath Yatra in Puri, there are many other such celebrations all over the country which too have a huge devout following. The second oldest Rath Yatra after Puri is the one at held at the Mahesh Temple in the small suburb of Serampore in West Bengal’s Hooghly district.

The fair, held at Mahesh in Serampore, Hooghly district, has grown up around India’s second oldest Rath Yatra (the annual chariot festival to honour Lord Jagannath), a spectacular event virtually impossible to describe to those who have not witnessed it. The current year marks the 626th anniversary of the festival at Mahesh,

The place is the biggest centre of Jagannath worship outside Puri and has an unbroken tradition since 1396 CE, this year being the 624th year of celebration. This Rath Yatra also indicates that Jagannath worship had spread to Bengal long before Chaitanya Mahaprabhu undertook his historical pilgrimage. In fact, Sri Chaitanya had visited the Mahesh temple and made his disciple Kamlakar Piplai its head priest. He had named the place ‘Naba Nilachal’, meaning the ‘new Puri’.

Like other legends of the Jagannath cult, the story of Mahesh temple too is an interesting one. As the legend goes, Drubananda Bramhachari, a sadhu from Bengal, had undertaken the pilgrimage to Puri. The pandas had stopped him from offering ‘bhog’ directly to the Lord, doubting his credentials. The broken-hearted Drubananda decided to fast until death.

On the third day, he heard the Lord’s voice in his dream: “Drubananda, go back to Bengal. At the bank of Bhagirathi, you will find a place called Mahesh. There I shall send you a huge Daru-Brahma (Neem trunk). Make Balarama, Subhadra and my idol with this trunk”.

Drubananda returned to Mahesh and started his Sadhana. After a few months, on a stormy rainy night, the Daru-Brahma appeared, floating down the river. Drubananda jumped into the water and retrieved the log and made the idols which were installed in a small temple. They are still in place.

Another popular folklore speaks of Jagannath himself going to Mahesh all the way from Puri to taste its famous ‘mihidana’. After having his fill of the sweet, he did not have money to pay and had to pawn his armlet.

Bankim Chandra Chatterjee’s famous novel ‘Radharani’ too has a wonderful description of the Mahesh Rath Yatra. Radharani, the little blind heroine of the novel gets lost in the melee, and is found by her future lover. Bankim’s description of the Rath Yatra is a vivid picture of the festivities.

The present Mahesh temple is built on the ruins of the older one. It was built in 1755 by Nayanchand Mallik, a devotee from Pathuriaghata. It is a simple structure of the Rekha Deul  style of the Odishan School. The temple has two sets of idols. The original 600-year-old images are not taken out during the Rath Yatra, another set is used.

The idols in the Mahesh temple do not undergo the Nabakalebar. The three original idols, made by Drubananda Bramhachari, are still in place. However the tradition of ‘angaraga’ or re-anointment takes place once every 12 years.

Two days after the snanayatra and just two weeks before the Rath Yatra, the three-day secret ‘angaraga’ ceremony is held. The idols are repainted using herbal pigments behind closed doors. The artist covers his face and eyes while painting the idols and have only one meal a day for three days.
Like the Pandas of Puri, there is a hereditary structure among the priests in the temple; the ‘sevayats’ here are referred to as ‘adhikaris’. The first of the 64 mahantas, Kamalakar Piplai, was the fifth of the twelve Gopalas of Sri Chaitanya. He was the son of the Zamindar of Khalijuli in  the present-day Sunderbans, and had come to Navadwip for his religious studies. He became a favourite of Chaitanya Mahaprabhu and joined his ministry. His descendants still rule the roost in the temple and can recite their unbroken lineage in one breath.

The difference between Mahesh Rath Yatra and the one at Puri is that only a single permanent chariot is used. In 1797, Krishnaram Basu had donated a big chariot to the temple for the annual Yatra. However this chariot burnt after a few years. Two more chariots, too, met with a similar fate in the next 50 years. It was only in 1885 that the present chariot was built by the Martin Burn Company, under the patronage of Dewan Krishnachandra.

The Chariot is a four-storied structure — 50 feet high, with  nine towers and 12 wheels made of iron and wood and weighs 125 tonnes. The Rath is designed as a Navratna temple having nine shikharas. The Rath has a steel framework with wooden scaffolding. It is fitted with 12 iron wheels, each measuring 12 inches in circumference. Two copper horses are attached to the front. It has been in use since 1885. Lord Balabhadra’s measures 43 feet, and Ma Subhadra’s chariot is 42 feet. The Rath weighs 125 tonnes, and is pulled by huge Manila ropes. It has four storeys and 12 wheels, signifying the 12 months. It also has 96 pairs of eyes drawn on it, symbolising the eyes of Lord Jagannath.”

The first storey of the Rath has depictions of the Chaitanyaleela, the second and third storeys have the Krishnaleela and Ramleela, respectively.]

A day before the Rath Yatra, Jagannath is sworn in as the king. On the day of the festival, the Jagannath idol placed on the top storey of the Rath. The idols of Balaram and Subhadra are also placed in the Rath. A Nilakantha bird is brought and made to sit at the topmost shikhara of the chariot. When the bird flies away, the procession starts.

The festival is a week-long grand affair and is attended by nearly five lakh devotees. People throng to have a share in pulling the long ropes on the journey from the temple to Mahesh Gundicha Bari, also called the Masir Bari, and back to the temple on the eighth day.

In a spirit of celebration and obeisance, the devotees sing and dance all the way through to the rhythmic beats of cymbals and drums. Both Ramakrishna Paramahamsa and Sarada Devi were regular visitors to the temple and the Rath Yatra. For the devotees, a glimpse of the Lord on the chariot is considered to be very auspicious. The sanctity of the festival is such that even a touch of the chariot or even the ropes with which these are pulled is considered enough to confer the results of several pious deeds or penance for ages.

Two other Rath Yatras of Bengal, the Guptipara and the Dhamrai, are also famous for their uniqueness.