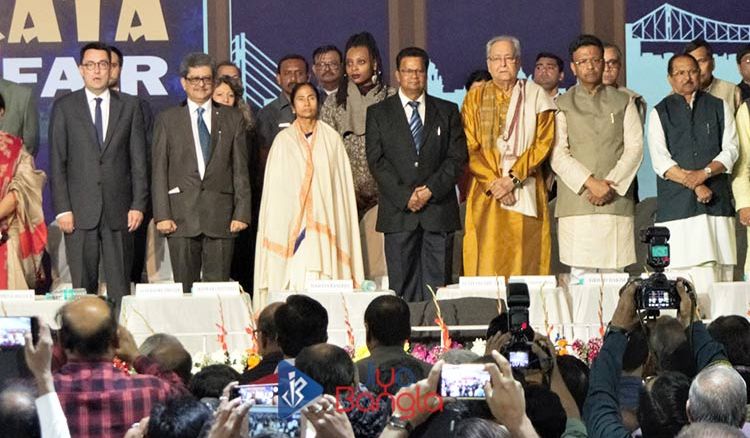 Honourable CM of West Bengal and Soumitra Chatterjee shared same platform in International Kolkata Bookfair 2018 inauguration ceremony. The presence of the eminent personalities along with the foreign delegates has enhanced the sensation of the event this evening.

On 30th January 2018, honorable CM of West Bengal Smt. Mamata Banerjee inaugurated the world’s biggest book fair “Kolkata Book fair”. Along with her Subrata Mukherjee, Firhad Hakim was also present on the pulpit. The event was the evening’s one of the most glorifying one. Last year Smt. Mamata Banerjee penned 79 books and that is definitely a benchmark. This year she took due initiative to release a few books penned by the senior Police Officers of Kolkata Police. She was enthralled to promote the anthology of 100 poems written in Urdu by Murlidhar Sharma, Deputy Commissioner, Special Task Force, Kolkata Police. Apart from that she released a book of Humayun Kabir that circles round the relation and the communal life of the Muslims and the Hindus principally in the rural part of Bengal and three books by Supratim Sarkar dealing with the murder mysteries that were efficiently handled by the detective department of Kolkata Police.

From the very start of Kolkata Book fair, the stalls are truly over crowded with the booklovers and this year the location has shifted to Central Park mela complex in Salt Lake. This is in fact world’s biggest platform for the booksellers’ guild and the publishers to showcase the new talents along with the predominant books. Kolkata Book fair will continue till 11th February 2018. To be honest this is high time for the bibliophiles.