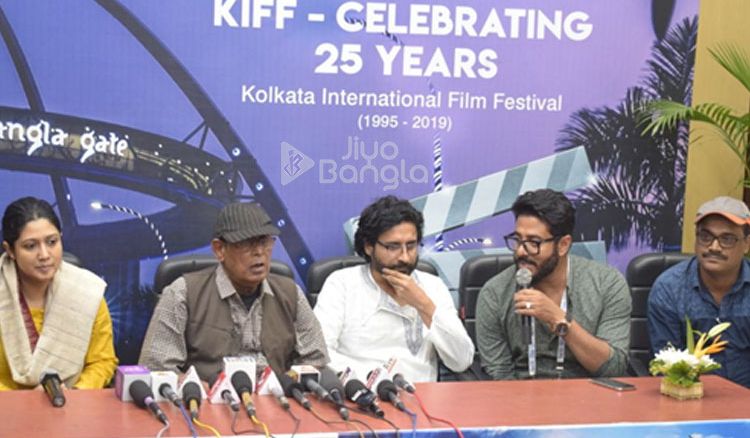 ‘Watch ‘Urojahaj’ and decide for yourself if you can connect’: Buddhadev Dasgupta

‘Urojahaj’ is a tale of common man’s fight against authorities and the audience will understand it’, said Buddhadev Dasgupta at a press conference which was held at Nandan media corner on 11th November.

Other than Buddhadev Dasupta, the event was graced by Raj Chakraborty, Chandan Roy Sanyal and Kumar Sahani was present at the press conference. The movie showcases the dream of a common man and his desire to fulfill them. Speaking with the media, Buddhadeb Dasgupta said, “It feels good when people watch my movies. A small newspaper report caught my attention year back. It was about a weird dream of an apparently crazy man. I started developing the concept for my film. I wanted to make a film on journeys of dreams- some lost amidst the growing violence and intolerance of today’s time. But I must say, this film is on simple human dreams and the dreamers.”

‘Urojahaj’ was screened at Nandan sharp at 7:15 pm; the screening of the film was in the ‘Maestro’ section for this year’s KIFF-2019. Dasgupta said his protagonist refuse to bow down and somewhere the audience related to it. Before the movie release, in the press conference the 78- year-old filmmaker refused to elaborate the story-line. “I won’t say much, you all have to watch this movie and decide for yourself and justify,” Dasgupta said.

To a question, he said, “It was really tough and challenging to assemble the actual size of World War II aircraft model but we somehow pulled the story.” Meanwhile, veteran filmmaker and scriptwriter Kumar Sahani said, making a film is always an act of bravery. And we all should have the courage to do that.