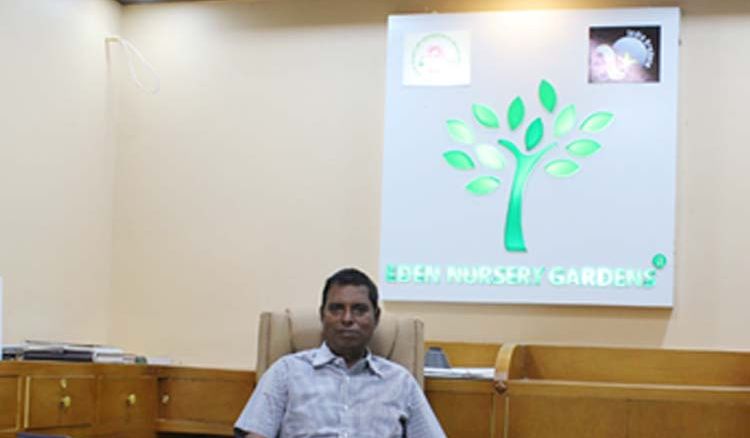 Of all the part and parcel of a plant, we probably consider the leaf as the most unnecessary when it comes to farming. However, the 50 year old farmer, S Rajarathnam has different opinion.  He has proved himself to be the first man on planet Earth to develop a technique of reproducing a plant from its leaf.  This technique originates from a humble nursery situated at Mettupalayam, near Coimbatore. This Eden Nursery Gardens is actually an experimental laboratory of Rajarathnam since the last decade.  And in these 10 years, he has burned the midnight oil to make his ground breaking achievement.

Rajarathnam owes his expertise to Tamil Nadu Agricultural University (TNAU) in Coimbatore.  He has mastered his genius of tissue culture from there. According to him, no parts of a plant are to be considered unnecessary, not even the leaves. From this concept, his brilliant idea of producing plants from leaves germinates.  According to him, plant cells are present everywhere in the plant body, and if shoots can be used to reproduce plants, why not leaf..

It was really an awe inspiring spectacle when experts at TNAU witnessed with dumbstruck eyes, roots germinating from leaves.  Rajarathnam’s work with various plants and leaves such as Jasmine and Noni (Morinda  citrifolia) resulted in his breakthrough. His pivotal day came in 2012 when he witnessed roots from his jasmine leaves and showed it to experts at TNAU. These leaves are under further experimental surveillance.

Rajarathnam says that his main motive in toiling for this breakthrough is reducing the cost of farming. Instead of selecting the seeds, we now just have to select the leaves which would be far easier and cheaper. He used very basic and cheap equipments for his experiment and created a humidity chamber with leaves planted in bags. His main concern was the drying out of leaves.

In current days, Rajarathnam is busy teaching his methods to anyone and everyone willing to learn. He wants every farmer to know this technique and thus has simplified it. Today, he has successfully grown 10 species of plants using his technique.  It would be path breaking if our major food crops could be produced in this way.  He has also applied for patenting this technique.

Rajarathnam says that the difference between a botanist and a farmer is that while the former works for science, the later works for common people. That is truly well said by him.