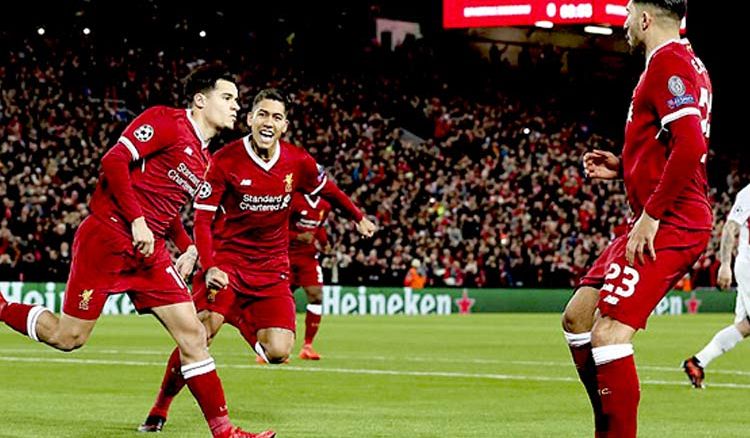 On a cold night in Anfield, Liverpool’s front four put on a devastating display of attacking masterclass as Liverpool thrashed Spartak Moscow to finish top of Group E in the Champions League.

“Nobody could have imagined this,” said Liverpool Manager Jurgen Klopp on Wednesday night. “It was an all-or-nothing night for both teams but we started perfectly and showed that we are really difficult to play against when we go into the next gear.” Klopp added.

While Jordan Henderson was benched, Phillipe Coutinho was handed the captaincy and he seemed to relish the added responsibility.

Mo Salah was fouled inside the box on four minutes, for Coutinho to step up and score from penalty for his seventh goal of the season.

Spartak tried to contain Liverpool’s attack, but left spaces in behind and were punished again by Roberto Firmino, who slammed home from close range after some poor defending by Spartak against free flowing counter attacking football.

Post half time, Sadio Mane connected with an acrobatic volley to extend Liverpool’s advantage while Coutinho secured his hat-trick with a deflected effort shortly afterwards.

Thereafter, Sadio Mane again finished superbly for the sixth goal of the night and Mo-Salah took Liverpools' goal tally for this Champions League campaign to 23 with a clever finish.

Last night’s result ensured that Liverpol finished as Group E winners which means the Reds of Liverpool avoid the likes of PSG, Barcelona and Roma; but Bayern Munich, Real Madrid and Juventus could be their potential last-16 opponents.