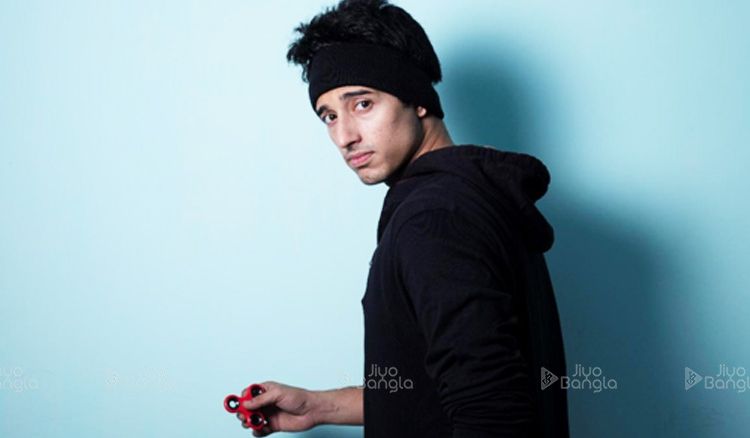 Recently Aryaan Bhowmick turned into a hacker called ‘Remo’, for his recent film ‘Hacker’. In a twenty-minute interview, the actor told us about his prep for this role, his equation with co-star Ena Saha and his future films.

#.How is the experience while working with the Debutant director duo Siddharth Sen & Subrata Mondol?

Aryann Bhowmick -Director Duo was phenomenal. Our concern was, the team has to function well. That one was a major concern. We had to work minutely on every topic and we did. Each and every hacking is explained in a throughway. They turned out to be fantastic and hats off to their team spirit. Most importantly they were open to ideas. Everyone’s suggestion was important, it was a continuous process. It was lovely working with them.

# What intrigued you to take this challenging role?

-It was a challenge. Building a hacker from the stretch was really interesting. This character ‘Remo’, he has two dimensions. I am very fortunate that I got this role. Vandana Agarwal stormed out the concept. The story itself intrigued me. The honesty of this hacker was intriguing. Each and every theory is thoroughly explained.

# How was the equation with co-star Ena Saha?

-It was very nice. We became very good friends. We did another project after that. Never had the opportunity to work with Ena but this movie gave us that space. She is fantastic! She helped me to balance my character. It’s tough to prepare the role of Remo: the hacker, but she helped a lot.

# Every hacker has an alias name & your is ‘Shadow Spinner’. What’s the story behind this name?

-There a famous hacker known as ‘Mark Abene’, who’s alias name is Phiber Optik. He transformed from an unethical hacker to an ethical one. My character is much similar to Mark but we made some alterations for sure. The challenging part was to find an alias name. Alias names are always personal it’s more like a shadow. When we use to work out for the alias name, the fidget spinner was part of my body. We thought about ‘Darkness, Unethical, spinner’ … and shadow spinner was born.

# What message you want to convey to the audience?

-It a very good question actually. The biggest message from this film is: making people aware of this hacking. Another message is: We are getting into a digital world and the more it grows, unethical hackers will be on the rise and cybersecurity will be much bigger. To break down such thought people need to understand that ethical white head hackers exist. There is a famous quote “The third world war won’t be on the battlefield, it will be on the internet’. Take it as a profession, study about it.

# Prepping for the role, was it a cake walk?

-No, it wasn’t but I must say it was amazing and a great journey. Apart from my look, had to pierce my ear. I cocoon myself to embrace the character. My Character ‘Remo’ used the spinning time as a challenge. Within the spinning time of the fidget, he had to complete the hacking. It was fun to shoot. Had to read the biographies of hackers and learn their motives and reason behind the hacking. it was a lengthy process.

# Spill some bean about your next project

-Director Shabbir’s ‘Bhut Chaturdoshi’ will release- that’s a horror film. Well, there’s, director Rajorshi Dey’s film ‘Purba Paschim Dakshin’ in the pipeline, where I played a negative role. Then Dhruva Banerjee’s ‘Durgesh Garer Guptodhon’ is there. Will start another film in March… March 15th, though the name is yet to be decided. And of course, Kakababu is there.