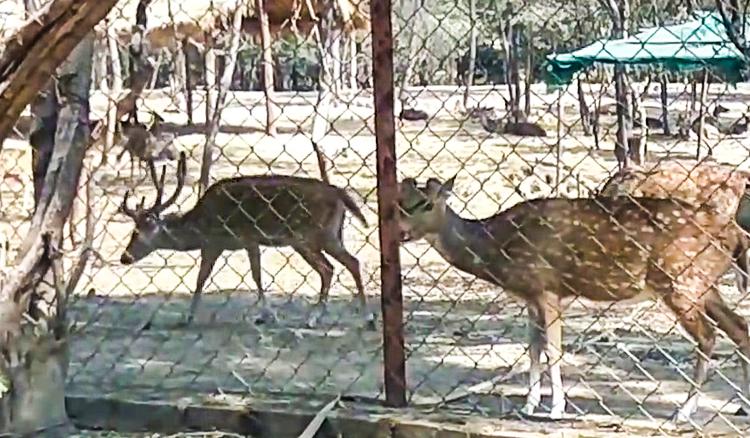 The rising mercury is not only affecting humans but animals as well. Authorities of Surulia Mini Zoo at Purulia district have made changes in the menu of animals there to give them some respite from the temperature which is hovering around the 42 degree centigrade mark.

The usual diet chart of bears and deer comprised milk, bread, egg and maize. Those have been replaced by cucumbers, water melons and glucose. Bears are being bathed for longer hours during the day.

The rocky regions of the district adjacent to Jharkhand is used to witnessing scorching summer every year. This year the heat waves have been a lot earlier than usual and Met officials said that it would continue till mid-June.

That had prompted zoo authorities to bring about the changes.

The zoo, located on the outskirts of the district houses 22 deer, two bears, three chimpanzees, two monkeys, one peacock, two porcupines, one owl and one python.

Of these inhabitants, zoo authorities have changed the menu of deer and bears as they thought they were more susceptible to falling sick in the sweltering condition.

The shelters of all the animals and birds have been covered with sacks which are kept moist artificially to help bring down the temperature of the enclosure.

Range officer Nalini Kanto Mahato who is in charge of the zoo said that it had been a practice every year to alter the diet chart of animals to help remain comfortable. He also said that jaggery powder was also added to the food of deer which helps them fight the loo. “At about 9 am cucumbers, water melons and chickpeas are fed to ensure that they are not dehydrated. More number of water containers are kept in the deer enclosure and glucose is added to the water,” he added.

Another official said that bears were hardly eating any food and were more interested in water games as the day progressed. As they did not want to come out in the open, it was leaving visitors disappointed.