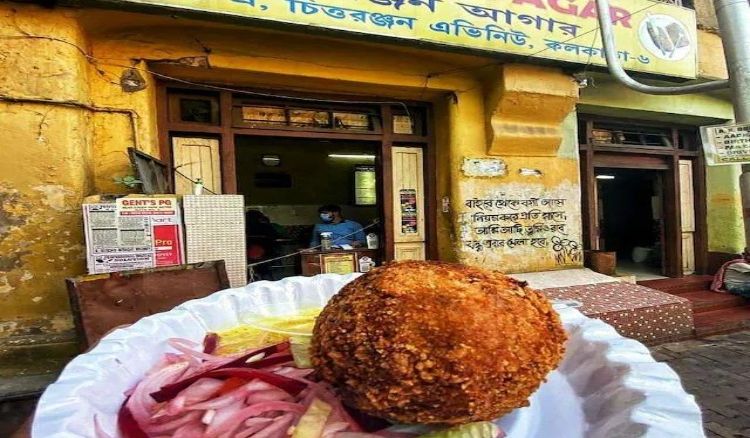 The old restaurant ‘cabin’ that serves snacks for the people of kolkata and a short list of popular dishes under basic interiors completed its centenary.  Trailing down from Girish Park metro station you can notice a bright yellow signboard inscribing that Niranjan Agar was established in 1922. Earlier this month, Niranjan Agar, rang in its centenary year with its staple dimer devil and mutton chops. One of the most popular joints in the Girish Park area, this heritage eatery is located at 239A, Chittaranjan Avenue, near the Girish Park metro station, and was established in 1922 by Niranjan Hazra. The place has got a rich nostalgic vibe. The restaurant has two parts- two adjacent rooms. First part is a small but brightly lit room which recently got a makeover and ugly plastic furniture. The second part is a tiny, dark hole with low-ceiling, giving you the feel that you are sitting under an old staircase. It’s furnished with a large wooden table with benches on both sides.  Niranjan Agar is unlike any other hideaway stall or telebhajar dokan. A key aspect of its legacy has to do with a dish which has a colonial origin story that still confuses some food historians. The popular dimer devil of Niranjan Agar is actually a showstealer. This menu shares more in common with the Bengali dimer chop than it does with the quintessential devilled eggs, which are made by scooping out the egg yolk and mixing it with mayonnaise and mustard. This luscious filling is then filled back into the egg white to be served as a delicate canape. Another item which is worth mentioning is their stupendous dynamite like vegetable chop. Its filling with mashed potatoes and seasonal veggies which makes it super delicious.
It is heard that the celebrated names of Bengali celluloid like Uttam Kumar & Tarun Kumar frequently visited the cabin for its iconic dimer devil. Niranjan Agar has been a go-to haunt for office-goers through the decades, chatting over a plate of fish fry and chai has been their favourite gupshup. One interesting thing is that on Thursday they don’t serve mutton items due to some religious context. Every Thursday, Niranjan Agar has a special menu, which includes a fowl curry and egg chop —features eggs in a fried, crumb-coated vehicle — a medley which has only grown irresistible with each passing decade and bite. Thus Niranjan Agar shall always stay deep rooted intrinsically in the Bengali emotion as an evergreen long lasting heritage of a long 100 hundred years.