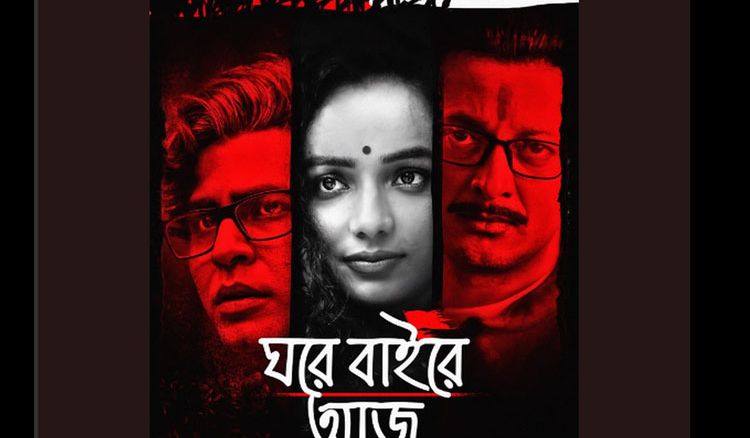 ‘Nikhilesh is way too good for this world’: Anirban Bhattacharya

Aparna Sen’s much anticipated ‘Ghawre Bairey Aaj’ is gearing up for its theatrical release. Not to mention, the moment this socio-political trailer was dropped it created buzz in the town. The movie is a modern day adaptation of Rabindranath Tagore’s iconic novel ‘Ghare Baire’ and not the film which was presented by legendary director Satyajit Ray. Apart from a socio-political film, this Ghawre Baire Aaj is a love triangle starring Anirban Bhattacharya, Jisshu Sengupta and Tuhina Das in the lead. Apart from these three characters Anjan Dutta and Rwitibroto Mukherjee will play key roles.

Even before its releasing date, the movie has already bagged its first festival award and Aparna Sen won the ‘Best Director Award’ for bringing up such an agenda at the Jagaran Film Festival. The movie deals with Nikhilesh, Brinda and Sandip (the leading character in the storyline) and the socio-political conflict in the society. Jiyo Bangla was in conversation with two of the lead characters of this film Anirban Bhattacharya and Tuhina Das.

Question to Anirban: Have you met your reel life character Nikhilesh in real life?

Anirban: No way. He is not there, he is nowhere. Nikhilesh should have been here with us but he couldn’t because he is a bookish character. Better off in stories, cinemas and reel life. Nikhilesh is way too good for this world. We all should have been Nikhilesh but we have stopped somewhere.

Question to Tuhina:  What do you have to say about your first film?

Tuhina: I came to know that I was selected for this movie much later. It was a rollercoaster ride, undoubtedly. I am grateful that Rina di became the first director. She is an institution herself; she is brilliant, magnificent and beautiful inside out. However, my character shows the journey of Bimla to Brinda.