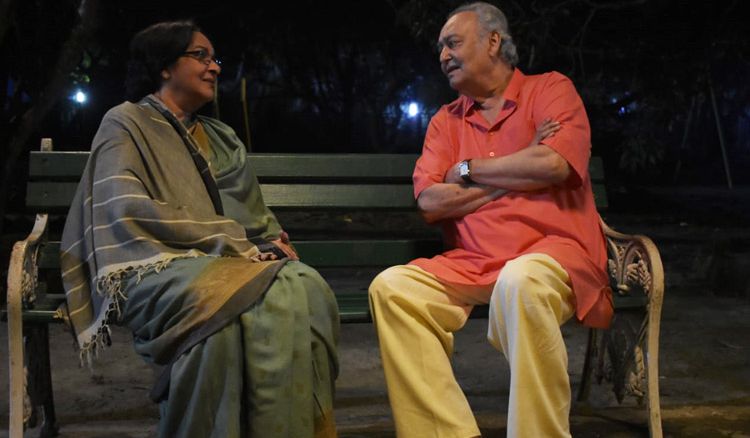 ‘Shesher Golpo’ by Debutant director Jiit Chakraborty and creative producer Soumyajit Ganguly is a masterpiece. This movie is an ‘imaginary’ extension of ‘Shesher Kobita’, a novel by Rabindranath Tagore.

‘Shesher Golpo’ starts when Amit Ray (played by Soumitra Chattopadhyay), who currently running an old age home in the outskirts of Kolkata meets the new member of the old age home and she is none other than Amit’s former ‘lover’ Labanya Dutta (played by Mamata Sankar). Years ago destiny forced young lovers Amit and Labanyo to drift apart. Now in their twilight years, the lovers meet again. The movie also shows the story of a young couple, Akash and Kuhu, facing the same circumstances that Amit & Labanya faced decades ago. The movie was screened at Priya Cinema hall on 19th July and it was graced by the cast and crew of the film. Director Jiit Chakraborty crafted a story worth watching for. Most interestingly, he left the audience with two important questions. Will Akash and Kuhu face the same fate as Amit and Labanya? And will Amit and Labanya be able to complete their love story?

We asked the director about his inspiration behind the story and he said, “Things are complicated these days, especially Love. I have tried to portrait some unfinished work. I hope the audience like this movie.”  Legendary actors like Soumitra Chattopadhyay, Mamata Sankar, Kharaj Mukherjee are in the lead roles, along with Pallavi Chatterjee, Kalyan Chattapadhay, Krishnokishor Mukhopadhyay, Aarna Mukhopadhyay, and Durga Santra.

The music score by Joy Sarkar has become the backbone of the project. The ‘classic’ songs were brought back to life by Nachiketa Chakraborty, Rupankar Bagchi, Anupam Roy, Kaushiki Chakraborty, Lopamudra Mitra, and Somlata Acharya.