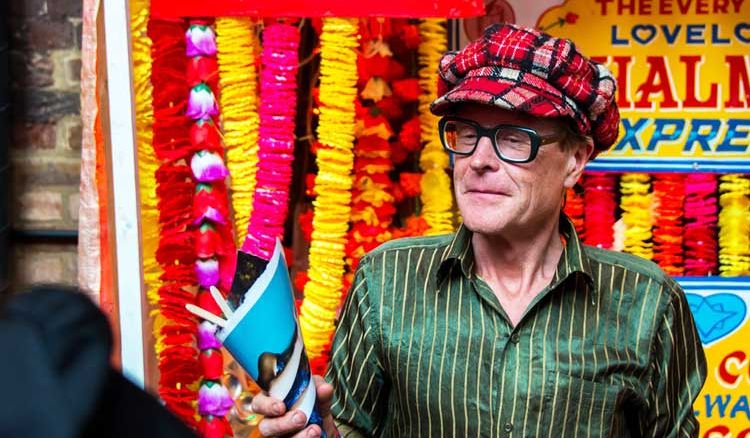 Jhalmuri from Kolkata to London

The ocean of Indian blues at the Oval on Sunday received a welcome surprise after Virat Kohli’s team crushed Aaron Finch’s Aussies- a Jhalmuri express near the ground.

British food entrepreneur, Angus Denoon became instantly popular among Indians, not only at the Stadium but also on Twitter. As he went across the stadium, people ordered loads of the treat and like an expert vendor, Denoon ripped out a page from a magazine, deftly rolled it into a paper thonga, tossed the jhalmuri, sprinkled the spices and went on with the next order. Jhalmuri is a tasty snack, hailing from Kolkata, made of puffed rice and an assortment of spices, vegetables, chutney and bhujia. Denoon learnt the art from the city of joy itself, a few years back during a trip in the year 2004. He was fascinated by a jhalmuri vendor near the Old Dunlop building on the corner of the Mirza Ghalib street and Royd Street- their speed and accuracy of work. “The guy was beautiful to watch as he swirled around his set like it was pure magic and at the end, he produced a bag of mystery which was light, substantial and tasted wonderful,” he said. It was then Denoon decided to learn the craft and take it back to the Queen’s country. As a chef himself, it wasn’t too difficult for him and he soon came back the next year to get useful lessons. He experimented with street food from other corners of India as well, but for variety, quality and price, Calcutta is in a league of its own, he believes.

Angus Denoon even made up a makeshift stall outside the stadium- bright yellow and red, with adorned garlands, very similar to the trucks Indian vendors use. Indians were joyous to see he had everything to make a perfect jhalmuri- even Imli Chutney. Angus is now very popular among upstate Indian functions and ceremonies in London.