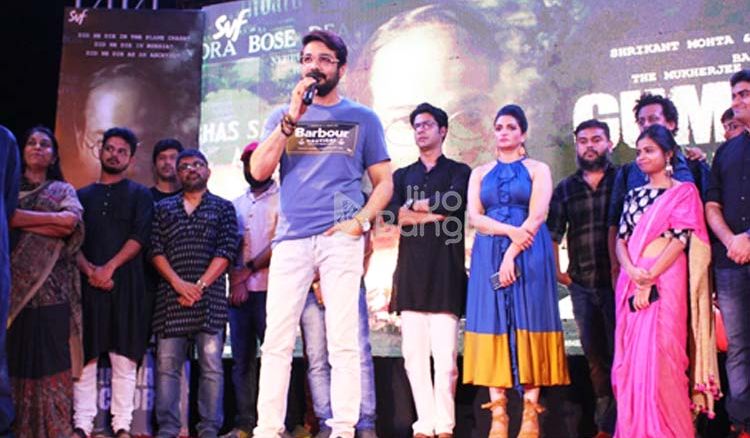 ‘I won’t stop even if they force me to stop’: Srijit Mukherji

Srijit Mukherji’s ‘Gumnaami’, based on the Mukherjee commission hearing will showcase the various theories on the death and disappearance of the greatest freedom fighter of India during British Raj.

The lead cast and crew of Srijit Mukherji’s ‘Gumnaami’ came together for the first time to celebrate the spirit of ‘the forgotten hero’ Subhash Chandra Bose at Simla Bayam Samity. Durga Puja which is celebrated at Girish Park was helmed and nurtured by none other than the great patriot himself.

The trailer starts with the Mukherjee commission in session, who once concluded that Bose didn’t die in an airplane crash in the year 1945. Three different theories of Netaji’s death have been stated which raises pertinent questions. Apart from actor Prosenjit Chatterjee, Anirban Bhattacharya, Tanusree Chakraborty, singer Ishaan Mitra and the director himself were present along with the crew. For the first time the scintillating teaser and trailer of ‘Gumnaami’ was showcased. The trailer comes with the soundtrack of Bose’s regimental quick march ‘Qadam Qadam Badaye ja’. Talking about the film Srijit Mukherji said, “Unknown people have stopped me and assured go ahead we are with you. I thank the audience for the love and support they have bestowed upon the film. This is not just any other directorial venture for me; it is a duty which I want to serve. I have received threat calls and believe me I am not even worried.  On the other hand, I have received calls, emails, innumerable messages and tweets with positive words and I look forward to the release of Gumnaami on 2nd October. Watch the movie and deliver your verdict and I rest my case here.”

Gumnaami is scheduled to release on 2nd October coincidentally it is Gandhi Jayanti. The movie will release in both Bengali and Hindi.