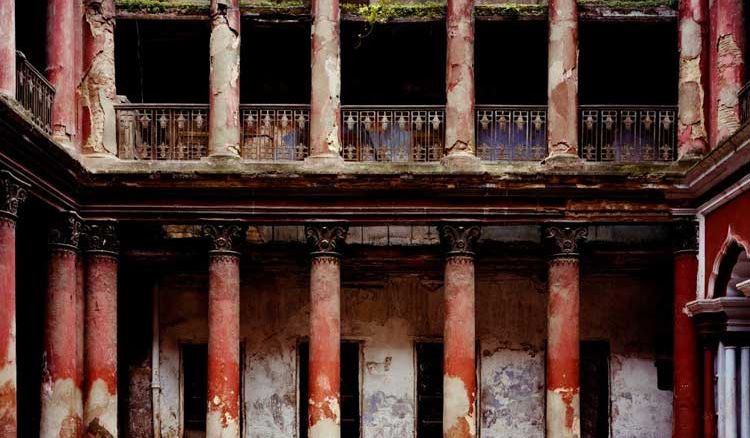 Sutanuti, one of the villages which were part of erstwhile Kolkata falls in the locality of Pathuriaghata Street.  Pathuriaghata Street carries a lot of heritage with it. The place basks in old glory. It was the dwelling place of the affluent and the opulent section of society.  It was one of the most prestigious parts of North Kolkata which is now mostly dominated by the Marwari community. Some of the mansions of the place reflect old-world charm with its colonnade palatial buildings.

Pathuriaghata Street was home to some noteworthy residents. One of the oldest residents of the place was the Tagore family. The Tagore legacies of the streets of Kolkata are famously remembered. Some of the noteworthy members of the Tagore family who lived in their Pathuriaghata mansions are Darpanarayan Tagore, Hara Kumar Tagore, Jatindramohan Tagore, and Prodyot Kumar Tagore. Some of them later had streets named after them, adding to the legacy of Kolkata streets. The Tagores constructed two palatial buildings and they were referred to as “Tagore Palace”. The most significant mansions of the locality, the “Tagore Castle” is modeled on the Windsor Castle in England. The grand building was later remodeled by Haridas Mundhra.

Jotindra Mohan Tagore along with his brother Sourendra Mohan Tagore had started “Banga Natyalaya” and regular practice sessions took place at the auditorium of the Tagore Castle. The first play to be staged was “Kalidas”. Another eminent resident of Pathuriaghata Street, Jogendra Mohan Tagore, along with Social reformer Ishwar Chandra Vidyasagar started the weekly “Sambad Prabhakar” which later graduated into a daily newspaper.

The Mullick family and the Ghosh family are other eminent families of Pathuriaghata Street. The owner of the Mullick mansion was Jadunath Mullick. The building had fine cast ironwork done all over it, a rarity of the times.

Khelat Chandra Ghosh was the grandson of Ramlochan Ghosh, who was the clerk of Warren Hastings. It is believed that Hastings and his wife had visited the Ghosh household. The lineage of the Ghosh family is renowned for their cultural bent, and they patronized author Bibhuti Bhushan Bandopadhyay. The halls of the Ghogh mansion hosted the All Bengal Music Conference which started in 1937. It is is one such conference at Pathuriaghata Street that sitar maestro Pandit Ravi Shankar met his mentor Allauddin Khan. The first Kali Puja in Kolkata was hosted by the Pathuriaghata Bayam Samiti.

The current condition of Pathuriaghata Street is dismal. Many of the dilapidated buildings are worn off and needs immediate attention. Just a few years back there was an accident when one of the buildings collapsed, injuring some as well as killing 3 residents of the region.

Pathuriaghata Street now remains with much of its lost glory. It plays a crucial role in the growth and development of Bengali culture and tradition. To date, the name of the street resonates with feelings of nostalgia for those who witnessed the charm of the place.