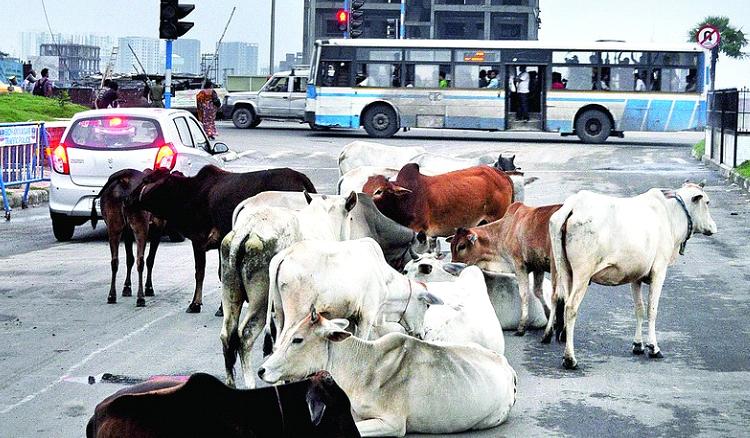 Cattle barrier to be set up at New Town

In order to curb the stray cattle from approaching the lanes on the hemline of New Town, the New Town Kolkata Development Authority (NKDA) has planned to set up cattle barriers on the edges of the streets to stop the animals from crossing roads. Since its operation from mid-June last year till date, a total of 692 cattle, including 192 buffaloes, have been captured and brought to the cattle shelter.

Not long ago, it was observed that a large portion of the cattle straying in New Town happens through some of the isolated areas in the township. One such area is Action Area 1D where almost dozens of buffaloes are found straying.

“To prevent this, a cattle barrier has been designed that will be built on road surface so that cows or buffaloes cannot cross the road. A pilot project will be taken up for this and if found suitable, this barrier will be installed in other cross-over points of the township as well,” said an NKDA official. The cattle barrier will be planned in such a way that vehicles can move smoothly on it but animals get stuck if they try to cross it.

“As a pilot project, the barrier will be installed on a stretch near the Bagjola canal in Action Area 1D. A CCTV camera will be installed to monitor the effectiveness of the barrier,” said another official.Last year, NKDA had set up the cattle shed and special stray cattle capture teams were also formed. About Rs 13.6 lakh have been collected by the authorities as fine while 22 unclaimed cattle were sold at an auction from which the authorities managed to collect Rs 67,000 till date. The cattle were kept in the shed for about a week until their owners claimed them back, where they were taken care of by the NKDA.