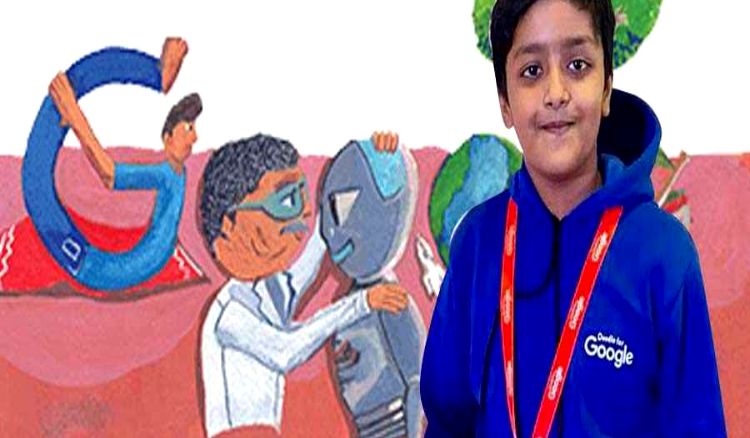 On Children's Day, a doodle art created by a child of class IV was featured on Google.com’s homepage. The doodle art represented each letter of GOOGLE with depictions of Ayurveda, nature, space and technology. The G represented a child doing yoga; the two Os were pehaps the most significant ones – one being a scientist and the other being a robot’s heads where the scientist puts his hand on the head of a robot with affection. The other G represented the smoke left by a speeding rocket which was surrounding the Earth; the L was a tree and the E was a leaf being churned in a bowl. The doodle art was created by Shlok Mukherjee, a class IV student of Delhi Public School, Newtown, who won the Google's 'Doodle for Google' competition by drawing this picture. The theme of the competition was how students want to see India in the next 25 years.

Shlok wrote about his doodle, “In the next 25 years, Indian scientists will develop eco-friendly robots for the betterment of human civilization. Indian astronauts will regularly travel to space. India's Yoga and Ayurveda Shastras will continue to flourish”. Shlok is getting a scholarship of 5 lakh rupees from Google after winning the competition. The competition received 1, 15,000 entries from students of Classes I to X from across 100 Indian cities.